History of the Vankleek Hill Agricultural Society and Fair

Our fair began shortly after the first settlement in the region. United Empire Loyalists, Irish and Scottish emigrants arrived in the early 1800’s. The 1830’s saw the arrival of French “Canadien” families from the St. Lawrence River Valley. By a legislative act in 1837, agricultural societies of Canada West (Upper Canada) were “for the purpose of importing valuable livestock, grain, grass seeds, useful implements of husbandry, or whatever else might induce to the improvement of agriculture.The earliest record that has been found for our fair, shows the forming of an Agricultural Society in Prescott County at a meeting held at the Court House in L’Orignal in 1837. The County Agricultural Show was held for the first time in L’Orignal, in the fall of 1844. This was the location of the fair for the next few years.

In 1872, the directors felt that in order to improve the Society, it was necessary to place the same on a permanent basis, with grounds and buildings for the exhibition. Suitable grounds were presented by James Boyd, Esq. of Vankleek Hill. The County of Prescott Electoral Division Agricultural Society, as it was known, paid $500 in cash for the property on what became Agricultural Street, east of Mill Street, in Vankleek Hill. The annual fair was held on this site, in early October of 1872, with new exhibition buildings. In 1894, a grandstand was erected on the new fair grounds.

Our agricultural fair was held in the fall and was a major outing for many families who travelled by horse & buggy, wagon or on foot. Even some of the show cattle walked to the fair. Schools closed to encourage children to attend this special event. Families were entertained by a variety of events, from side shows, band music, horse races to livestock competitions.

In the centennial fair of 1944, the fair was held on September 6, 7, & 8. Dr. G. S. Horace Barton, Federal Deputy Minister of Agriculture and former resident of rural Vankleek Hill, officially opened the fair, on September 7th.

In recognition of 100 years of Services to Agricultural and Rural Life, a $1000 grant was given by the Ontario Department of Agriculture, on the condition that the board erect a suitable centennial memorial. This was done, the choice being a flagpole, mounted on a concrete pedestal with an inscribed bronze tablet, on a large boulder monument. This can still be seen on the grounds, near the front entrance.

The presentation was made by the Honourable George H. Doucette, Minister of Highways for Ontario and accepted by the Society’s President, Dr. D. A. Irvine.
This was a happy and memorable occasion with excellent attendance, good weather and the Society now free of debt, plus $500 to the good.

In October 1948, fire destroyed the old grandstand, which was rebuilt by July 1949. A good supply of water was found, when a well was drilled in the fall of 1948. The horse barn, south of the grandstand, was built in 1948. Leslie Nixon was thanked by the board, for completing these improvements and work well done, in his years as the Society’s President (1947-1949).

Exhibits in the fair have changed over the years in quantity, variety, and methods. In the exhibit hall, the number of classes have increased and changed in content. In forage and legumes, quantities have definitely changed with a selection of 4 or 5 vegetables replacing entry demand of a bushel.

Once favoured breeds in the livestock barns have been replaced. For example, there was a Jersey section in the fair book of 1912, but there were no entries. The Ayrshire show was very strong in the early years, as was the Holstein show. In 1872 an interest in pedigrees for the Ayrshire breed was seen. Some livestock seem to come and go, like sheep, while others have disappeared altogether. Swine were removed in 1971, and poultry in 1965.
The first official Prescott County Holstein Show (Black & White Show) was held in 1943, at which time record-keeping began. Prior to 1943, both purebred and grade Holsteins were exhibited, but no records were kept. 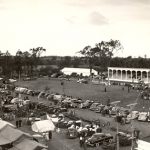 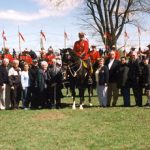 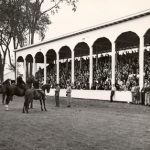 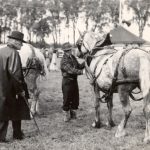 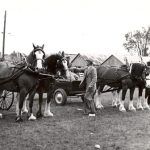